Somehow, I struggled through Docker. I will outline my steps so that you don't have to follow the tedious path.

First I tried to install Docker on Windows.

Pitfalls: OS version. If you don't have the Windows 10 Pro edition, you can use the Docker toolbox only.

And I checked the VirtualBox option for good measure and it did stand me in good stead because - believe this - the Windows Server image on the EC2 instance cannot have its Hyper-V/AMD something started because you can set the setting only in BIOS and on the EC2 instance, running on Remote Desktop (RDP), there is no way of accessing the BIOS, even if it made sense!

Below is the roadmap of the 1st attempt 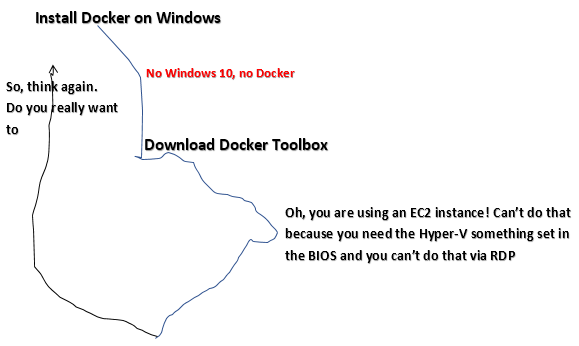 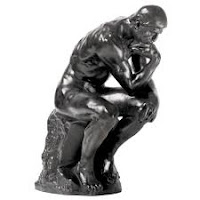 Okay! Let me check if an EC2 instance with a Linux Ubuntu image (AMI) was available. It was but I did not want to get into the Linux OS shell.

So, what is the alternative?

A native AWS stack that could host a Docker container on a kernel all its own, with a set of Docker engines. No underlying OS but on top of the AWS IaaS services! 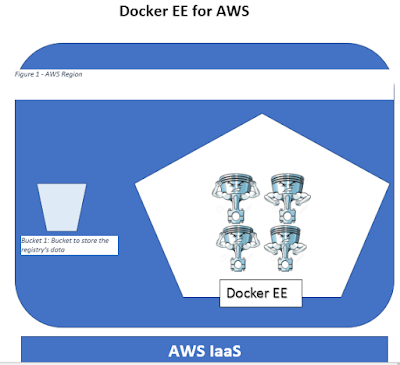 Sounds great but you really cannot see it working because when you try to access the public DNS via a browser, an Apache server message will greet you that the url you are looking for cannot be reached although the server is okay!

Docker EE for AWS is a one click template to quickly deploy Docker on Amazon EC2, says the Docker EE Store. And it is, if only the template stayed put in its AWS region. It seems that the tricky part has not been documented.
The KeyPair that the template requires must be an EC2 generated Keypair from the same region in which your EC2 instance is!

You can use this in your Docker EE deployment to AWS
Posted by RJV at 21:43 No comments:

Bitnami, WordPress and the AWS - a good rack

I just had to blog this - it is about my new blog on WordPress.

I had moved to Azure from AWS in 2013-14 not because I had anything against AWS or for Azure but simply because clients who wanted to use Microsoft ASP.Net and SQL Server made Azure the natural choice.

But it seems that the instances of Windows Server on AWS are more than that in Azure. The AWS has expanded like the Elastic Beanstalk with DevOps and Big Data capabilities and IoT.

At an estimated monthly cost of $5-6, AWS does offer some cool stuff.

One thing though. Why are the regions active in this menu

when an instance created in a specific region cannot be moved by the selection of a different region from the drop-down menu?

Bitnami on the Cloud with a Launchpad for WordPress is a revelation. Cool integration with aws and it even offers WAMP and other xamp stacks.

And yes, my WordPress blog on the cloud, not yet there, content-wise but it is seo enabled etc!
Posted by RJV at 11:48 No comments: