There is something about Scrum - 3

Velocity, that you often hear trumpeted in Scrum, can be quite misleading.

Velocity, in common terms, means distance traveled over time. But the distance needs point A from where the calculation of speed begins, and point B,

where the calculation ends.

Velocity, in Scrum, is calculated by the number of features/tasks/stories/bugs completed/delivered/fixed by a Sprint member over a given period of time.

More specifically, in the Scrum context, the points associated with a Story - in Agile parlance, a User Story can have some points associated with it as an estimate of effort - are added up for each successfully delivered story and the sum is the velocity achieved for a sprint or a timebox. Velocity is a paraphrase, or an euphemism, for Productivity.

The below image depicts all the data that is needed to measure productivity.

But, the picture although tells a lot still does not bring to light the need to measure productivity ie., a platform from which future planning, additional productivity improvements steps can be taken.

And, we also have the assignment of the resource - two resources are assigned to a task at 60 and 50% respectively and the formula (G12+G13) that has calculated shows (in the top left of the below image) that both the values have been taken into account to calculate the planned date.

Productivity is a dangerous metric to use or measure unless it is done in a mature environment and around maturer sets of people. Discussed or analyzed, especially on the internet where the amalgamation is made of disparities and varied cultures, the metric will fail to convince due also to relative application of local work culture and employee engagement parameters.

In conclusion, productivity in Scrum can be measured if the following is true:

There is something about Scrum - 2

But there is a way to ensure that you do not allow for crafty resource developers or managers or any smart alec from messing with your Sprint plan.

Once you set the week of Sprint (2nd column from the left, highlighted with values 1,2,3,4 signifying the week), a Sprint team member will work on on a particular task, you can restrict any work done outside of the planned weeks for the task, as shown above.

Although the Work done will show 8 hours of work done but the effort remaining part will still show the remaining 2 hours because the work was done outside of week 1 - 4 !

And if you draw a productivity chart, per team member, as per their allocated hours on a project / product team then you can track the difference of 1 or 2 hour(s) that was done outside the plan!

But, of course, as long as it is done within the Sprint, it does not make much difference but it does help you put the 'corrupt' manipulators in place ! :)

#ScrumPlanner
Posted by RJV at 23:43 No comments:

There is something about Scrum...

Ignoring Mr. Lingo-Nathan (a hideous rule-obsessed maniac), if a resource goes absent on the first day of a Sprint to the 7th day after the Sprint Backlog is planned (Mr. Lingo-Nathan would insist that the resource should not have gone on leave!), and a replacement resource is allocated the same work and the hours are billed as planned, how does it affect productivity, when we measure the effort of both Resource X and Y?

It is not a question that I pose but a preamble to manage Scrummers and Sprinters separately when doing Scrum. 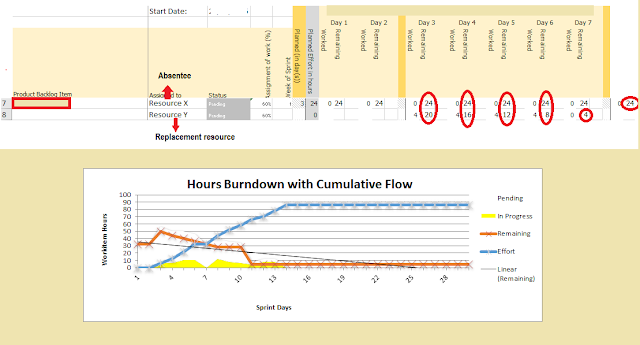